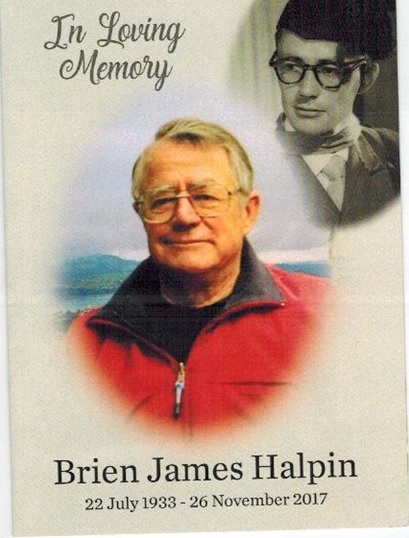 The funeral for Brien Halpin was on Monday, 5 December 2017. At the age of 84, another voice in the Christchurch Folk Music Club’s 49 year history speaks no more.

For the majority who read this, the name means nothing but that does not lessen the importance of acknowledgement. Brien was a quiet part of us in the 1970s, from about 1975 to 1980. We had recognised this kindred spirit by his facial growth, and welcomed him into the ‘bearded wonders club’.

It came out in the speeches that his interest in folk music was sparked on an engineering placement in England in the late 1960s (he graduated BE (Electrical) from Canterbury) and naturally he had to change his image. He returned with a head full of British trad. on the inside and a full black beard and long hair on the outside. He joined the club, then at the Arts Centre, sang lustily in chorus sessions and occasionally as a soloist: One member last week recollected:

“I just had a memory of him singing at the Gresham Hotel. Also he enjoyed his wine and we had a few dinners where we drank the wine and graded/rated it. Interestingly enough we had the same wine a year apart and gave it a similar grading each time!”

But he is probably better remembered for his enthusiasm in Mummers Plays, which Peter Morgan organised for the club over the same period Brien was a member: 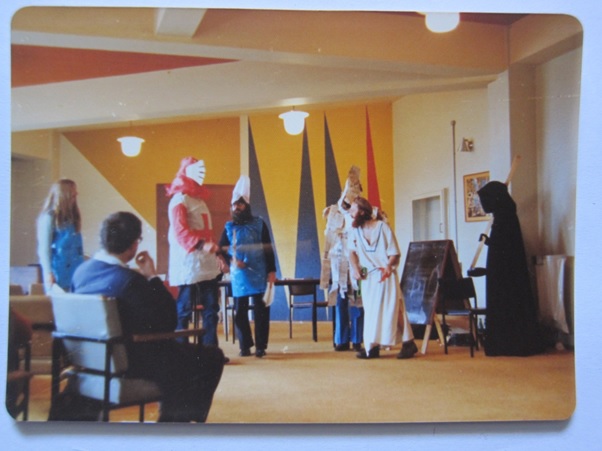 By this time (mid 1970s) he had married Carol and become a stepfather. Soon they added two of their own and this busyness plus a developing career took him out of the club and to new interests.

All through his alter egos as a medalled veteran table tennis player at national and Australian competitions, local harriers and personal researcher of anything that took his fancy, shone his devotion to Carol, the kids, grandchildren and young cousins. He was regarded by all as supportive, relatable and caring and a thoroughly nice guy. We leave him now on a slight apologetic note – sorry we kept spelling your name wrong, Brien!
By Tony Hale

END_OF_DOCUMENT_TOKEN_TO_BE_REPLACED

Remembering Christchurch hangouts of the 80s and 90s

Recently, an academic friend pointed me towards the word solastalgia. Solastalgia is a kind of homesickness for a place that no longer exists, a "place that you did not leave but that somehow left you". Finally, a word for the Christchurch spaces, hangouts and quirky...

END_OF_DOCUMENT_TOKEN_TO_BE_REPLACED

8 April 2017, Dave Cannan/contributed folk musician.   Phil Garland may have been a born and bred, TrueBlue Cantabrian, but as the self-styled 'father of New Zealand folk music' his huge influence was felt nationwide, especially in Central Otago, for which he...

END_OF_DOCUMENT_TOKEN_TO_BE_REPLACED

21 March 2020 - New Zealand went into Level 4 Lockdown - People were instructed to stay at home in their bubble and leave their residence only for essential travel. This meant the Club had to innovate -

END_OF_DOCUMENT_TOKEN_TO_BE_REPLACED

Article care of: Christchurch City Council   "Folk music is the voice of the community, the voice that traditionally comforts the disturbed and disturbs the comfortable. It is the music that binds the generations together, the harmony that bridges ages, cultures...